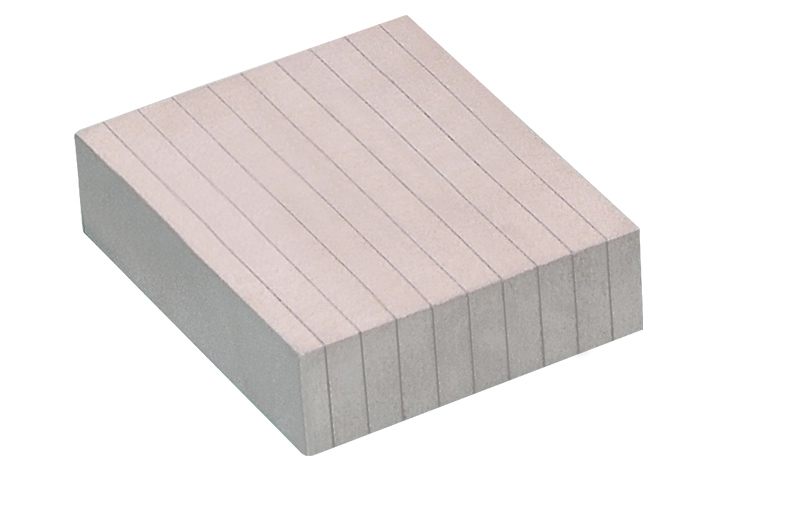 What is Laminated magnet?

Laminated magnet is produced with several pieces of magnets glued so as to reach insulation effect between those pieces. Therefore sometimes laminated magnet is also called insulated magnet or glued magnet. Laminated SmCo or laminated Neodymium rare earth magnets are proven to reduce the eddy current loss for the high-efficiency motors. The fewer the eddy current loss becomes, the lower the heat generates to enhance higher efficiency. Nowadays the demand for laminated rare earth magnets has been going up, because aerospace, industrial markets and promising EV especially are dedicating to pursuing the balance between motor power and heat. Thanks to knowledge in electric motor and extensive experience in laminated magnets, Horizon can work with customers to improve motor performance through ensuring laminated magnets with many characteristics.

1. Stable working at temperature up to 200˚C

4. Magnet layer with a thickness from 0.5mm and up in a wide of shapes like block, loaf, segment and wedge

5. Magnet material in SmCo or Neodymium

3. High efficiency is a must to the projects: Some projects must need higher efficiency rather than a lower price, but the current magnet materials and grades could not reach the expectation. And then laminated Neodymium magnets and laminated SmCo magnets could be the best option.

How to Produce a Laminated Magnet?

1. The laminated magnet is not simply glued by the thin parts together as what was seen. It needs very complicated and many times of gluing and fabrication. Therefore waste for expensive SmCo and Neodymium magnet materials is higher and the machining process is more. Moreover, many factors must be taken into consideration during the manufacturing process. Therefore the laminated magnet price must be higher than common people’s idea.

2. When the magnet is finished, the laminated magnet needs several types of test to ensure its quality, including appearance, magnetic flux, resistance, compression, etc.

We have also launched other types of magnets, such as precast concrete magnets, etc. You can contact us at any time and we will get back to you as soon as possible！