What is the Difference Between Neodymium Magnets and Ordinary Magnets?

Neodymium magnets are also commonly referred to as NdFeB magnets. They are Nd2Fe14B formed from three elements: neodymium, iron, and boron. In the 1980s, it was invented and manufactured by Japan's Sumitomo Special Metals Sagawa. Nd-Fe-B magnets are the magnets with the highest commercial performance currently found. They are called magnetic kings. They have extremely high magnetic properties, and their maximum magnetic energy product (BHmax) is more than 10 times higher than ferrite. Its own machinability is also quite good. The operating temperature can reach up to 200 degrees Celsius. And its hard texture, stable performance, and very good cost performance, so its application is extremely wide. But because of its strong chemical activity, its surface coating must be treated. (Such as Zn, Ni plating, electrophoresis, passivation, etc.).

Launched by Sumitomo Special Metals in 1984, this magnet is the strongest magnet on the market. Prior to this, the strongest magnet was a SmCo magnet developed by Europe and the United States. Both magnets are now used as part of small engines or speakers. The reason why many machines can be miniaturized is also due to the small and powerful magnets. This magnet has various shapes such as Segment Neodymium Magnet, Rod Neodymium Magnet, and block neodymium magnet. 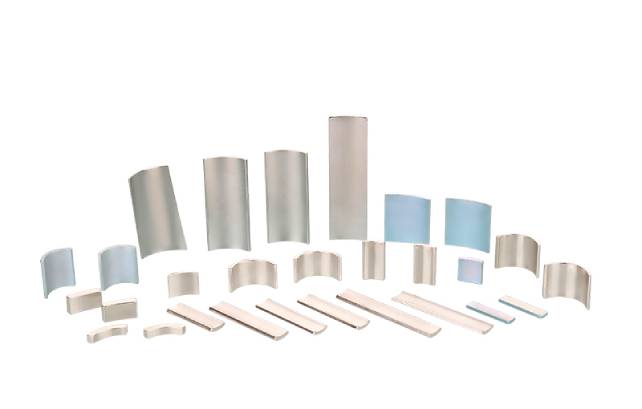 In the cost of our production, the cost of magnets occupies a large portion, and the price of neodymium iron boron magnets is often two to three times the ordinary price. These differences are mainly reflected in the characteristics of these two magnets. The magnetic field on the surface of the neodymium iron boron magnet is too strong and exceeds the coercive force of the ferrite magnet. When the same pole approaches, the ferrite is demagnetized and magnetized in the opposite direction. In the end, the same pole became the opposite pole, and they attracted each other.

As for neodymium-iron-boron, which has a large suction force with a homoferrite, and a small suction force with a heteroferrite, it is also well understood. For anisotropic ferrites, neodymium-iron-boron is only demagnetized on the surface layer of ferrite, and it is still repelled a little deeper. Isotropic ferrites have many magnetic moments that have not been magnetized, and neodymium iron boron is obediently magnetized.

The first reaction from many customers is that NdFeB products are too expensive! But there are also reasons for being expensive, and Segment Neodymium Magnet Supplier will introduce it to you.